One end of a spring with spring constant k is attached to the wall. The other end is attached to a block of mass m. The block rests on a frictionless horizontal surface. The equilibrium position of the left side of the block is defined to be x = 0. The length of the relaxed spring is L. 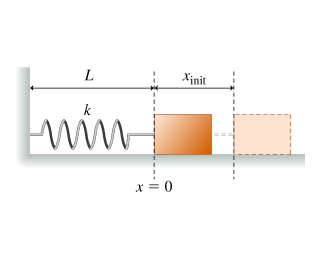 The block is slowly pulled from its equilibrium position to some position x_init > 0 along the x axis. At time t=0 , the block is released with zero initial velocity.

The goal is to determine the position of the block x(t) as a function of time in terms of omega and x_init.

where C, S, and omega are constants. 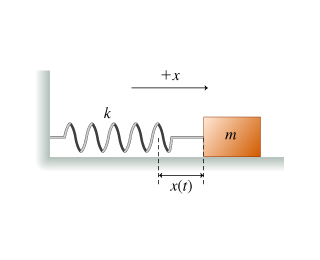 What is the equation x(t) for the block?

Express your answer in terms of t, omega, and x_init.

Now, imagine that we have exactly the same physical situation but that the x axis is translated, so that the position of the wall is now defined to be x = 0 .

The initial position of the block is the same as before, but in the new coordinate system, the block’s starting position is given by x_new(t=0) = L x_init

Find the equation for the block’s position x_new(t) in the new coordinate system.

Express your answer in terms of L, x_init, omega, and t.

No comments to show.

We are a team of people who absolutely love solving problems and making things that help you solve your problems. See Your Answer is a website that is dedicated to making the world a better place. We were created in order to help people get their questions answered quickly and easily.